I Dream of Ripple 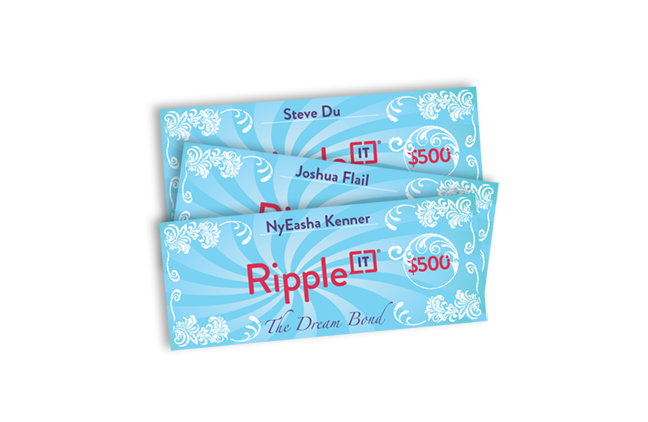 Last December, our boss, Mike Landman, introduced The Ripple Team to something he called a Dream Bond. After apologizing for the name, he handed out vouchers worth $500 to each Rippler and our significant others. In the past, our stocking stuffers have all been the latest tech innovations. But before we could boohoo about not receiving an iPad, Mike explained the significance of the name and why this gift was more than just a little loot to spend at the Apple Store. The Dream Bonds were intended as a way for us to visualize and work toward our life goals, both in and outside of Ripple.

Inspired by Matthew Kelly’s The Dream Manager, Mike saw the prospect of helping Ripplers achieve success outside of the office as something that would not only benefit us as individuals, but would continue to build a strong team. We had our first dream meeting in January, where we put our goals into three categories based on how long it would take to realize them: 1 year goals, 3-5 year goals, and the looooong term ones that could conceivably take over a decade.

At most of my other jobs, I’ve had to hide my love away, so to speak. Any ambitions outside of my employment were kept secret from management for fear that they’d be identified as a lack of dedication to my current career. Working at Ripple, I’ve been able to lower my defenses and actually talk openly to the Team about those ideas and aspirations that drive me. Professing the desire to write and direct for television hasn’t resulted in any doubts about my dedication to kicking ass at work. What’s more, hearing the other Ripplers discuss what makes them tick helped me to understand more of who they are and how we can connect. By our second meeting, Ripplers were giving advice, sharing contacts, and even offering to collaborate with each other.

We all still have ways to go on even our year one goals, but we’re progressing. By the end of 2012, we hope to announce that every Rippler is independently wealthy, has taken several vacations to foreign lands, and has collaborated with their co-workers to solve the problem of world hunger. Okay, maybe that last one needs to go into the 3-5 year category. I’ll keep ya updated.