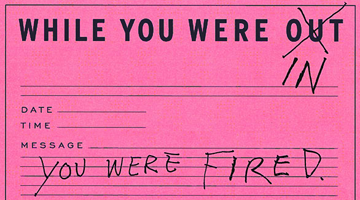 The story about the JetBlue flight attendant who lost it after dealing with a rude passenger reminded me of an article I wrote in 2006. I think it still holds up.

Seth Godin has a post about people being rude and disrespectful to airline staff. His question is: Should companies “blacklist” bad clients?

Ultimately it’s a question of how much long term benefit (working with desirable, respectful clients) you are willing to trade for cash right now. I would argue that your workplace is a better place when you move on from clients that are disrespectful.

Companies need to enforce a level of respect and dignity with customers. An airline should not tolerate abusive fliers and they should blacklist them. They make the airline staff and all of the other passengers uncomfortable, and they lower the bar for the rest of us. The entire culture of flying is degraded by the “entitled” flier. The abusive flier.

The airline industry is frustrating. I have done more than my share of complaining about it. But every business needs to draw the line at personal attacks. If the airlines started banning certain customers, they would send a powerful message to their own people: You matter. We expect the highest level of service and commitment from you, and you’ll get respect in return. The gratitude and re-humanization that airline staff would feel would be 100 times more powerful than all of the lame morale programs trotted out by the airlines to try to fix their service.

Airlines send a powerful message when they turn their cheek to such behavior: The lowest person that walks in here with $200 is more important to us than you, our ten-year employee. Abuse is simply a part of the job, and you need to suspend your dignity while you’re in the uniform.

To the Bat.. err Ripplemobile!