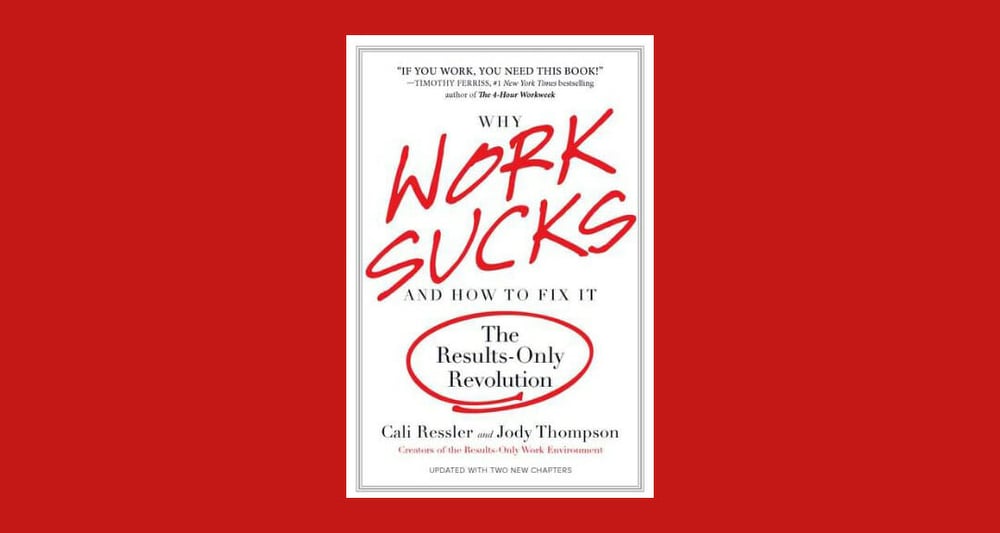 In June of 2010, I was asked by the ROWE honchos at GoROWE  to write on their blog a little bit of how Ripple became a ROWE. Here’s what I said…

Let me put this out there: I am a Work Utopia guy. I want people to come to work and feel like it’s more than a job. I want them to feel a deeper sense of meaning, connectedness, and engagement. I have implemented many, many ideas that would help make Ripple a Work Utopia. So when I read about ROWE in 2006 I was struck by how Work Utopia it was. Complete freedom! A Results-Only Work Environment. How much more Work Utopia could something be, really? Even with a Work Utopia mindset I still struggled with the perceived loss of control. I wondered: “How the hell could that even work?”

I mean there are a lot of things 4,000-person Best Buy can do that 15-person Ripple can’t. Maybe they had the infrastructure to manage it. Maybe they had money to burn. Maybe the old culture there was so bad, that anything, no matter how difficult, was worth it to turn things around. Ripple had a pretty great culture, and things were going fine. So I stopped thinking about it and put it on the back burner. What we had just didn’t seem broken.

I spent the next 3 years managing people with various levels of success. Implementing some rules here, some policies there. My great performers needed very little from me, but my underperformers needed lots of structure, managing, and cajoling, and I found myself making more and more rules to reign those folks in. When to arrive, when to leave, what constituted work. All the while, I watched productivity drop. Some of us remembered with nostalgia the “old days” when we didn’t seem to need all of this structure. When people would just dig in and get things done. That seemed to have changed. At our worst, our revenue per employee had dropped by 50% from just a few years earlier. That’s when ROWE came off the back burner. I read Why Work Sucks, and realized that I was building the wrong kind of workplace. The workplace I was building assumed that there are a few great people out there, a bunch of good ones, and an inevitable chunk that needs to be constantly managed. We were hiring the whole bell curve, then using the tools of the industrial revolution to manage them. The tools of time and place.

The Realization
What I really needed to be doing was hiring only the best, and managing them by results. Because the best don’t really need to be managed, they need tools and goals. They are also terrifically more productive than everyone else. I needed a workplace that would attract those people, reward those people, and weed out anyone else — fast. ROWE seemed to fit the bill. I decided to bring in my team and let them know what I was thinking.

The Meeting
We assembled for our annual retreat, everyone gathered around ready for a day of brainstorming. I had been pondering and thinking about ROWE for months. It took me quite a while to come around to the idea. But I figured when I plopped it out there, people would go nuts for it. How could they not? Who doesn’t want complete freedom? Unlimited vacation? No having to ask permission to go to the doctor? As it turns out, two types of people are skeptical:

The people in the #2 group don’t exactly present themselves (in meetings, that is. They definitely present themselves later), but that’s OK. Most of my team fell into the #1 camp. They wanted to make sure Ripple was servicing customers and functioning as a healthy company. There are 150 years of conventional wisdom that has built the proxies we substitute for work, and a 20-minute speech from me wasn’t going to overturn all of that. We spent most of the rest of the day discussing ROWE, goals, and what Ripple would look like as a ROWE.

The Course of Action
In the end, we decided we would test it for three months. We also decided to keep the results measures minimal and add to them as needed, instead of starting with a lot of measures and missing the mark on a bunch of them. We all agreed that if things seemed to be sliding, we’d stop and reevaluate. And with that, we launched ROWE. There was no sliding, only accelerating. Within those three months, the people that were not a good fit for a ROWE had exited and the people left were the best of the best. By the time three months had passed, there wasn’t anyone with even a passing thought of going back. Our work was better and our lives were better. Change comes at a price, especially when that change involves rejecting a philosophy that is practiced by most of society. Where some ROWE companies struggle with internal enemies, we mostly struggle with external ones. Friends, associates, and even family that look upon ROWE as some sort of an excuse not to work. Assumptions that ROWE is code for lazy or unmotivated. Lots of “oh, you’re ‘working’ from home again” commentary. From my entrepreneur friends I often get sort of a wistful “that sounds awesome, I wish something like that could work in my business.”

The Results
The results speak for themselves. In the two years since we started ROWE our productivity has shot through the roof, and with it, profitability. We do the same work with about 60% of the headcount. That has been an astonishing turnaround. Can I attribute that all to ROWE? Probably not. But to the naysayers, I say this: At minimum ROWE didn’t keep it from happening. Anarchy did not reign, the sky didn’t fall. People can, in fact, be trusted. The real truth is that there is no doubt that the culture shift that came with ROWE enabled a whole lot of that productivity. At Ripple, no one has tolerance for non-performers anymore, and non-performers don’t have anything to hide behind. They are either getting the results, or they are not. ROWE is a work in progress, and just like any human system, it is not free of problems. But that has proven no reason not to embrace it. The system we were working under before (invented when people rode horses to work) had tons of problems. It may not be Work Utopia, but ROWE has gotten us a whole lot closer.

Advantages to Having a Flexible Workforce

A Sick Day at Ripple