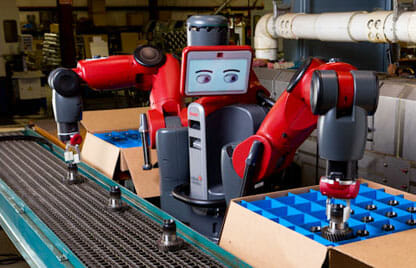 So just how much better is Baxter than the working bots today? Well, a lot. Conventional industrial robots are generally expensive to program, incapable of handling even small changes in their environment, and so dangerous that they have to be physically separated from human workers by safety cages. Baxter, however, is incredibly easy to program, and can deftly respond to a toppled-over part or shifted table. And as for the safety factor, Baxter’s developer, Rethink Robotics believes it can work seamlessly alongside its human coworkers.

Whether or not Baxter would contribute to a loss jobs is debatable. But Rethink Robitics cast Baxter as a way for the United States to compete in the global manufacturing market against countries employing low-wage labor. And a number of experts–including Willy Shih, a former IBM excutive and current professor at Havard Business School–agree that robots like Baxter could improve US employment prospects over time. Says Shih, “To the extent that they can reduce the setup overhead for changing over a line or something, then that becomes really interesting […] Anything that improves flexibility, that’s a huge deal.”

For now Baxter remains officially unemployed, but with a proposed price tag of just $22,000, people at small manufacturing plants may soon find themselves working alongside a six foot tall, 300 pound robot with a pair of digitally-drawn, emotive eyes. Which brings up the inevitable pop culture question: Just how close are we to realizing Skynet?

What is Meltdown & Spectre and what should you do?